The Southern Asian woman has to carry many qualities to be liked by her elders. Almost every outcome that happens is reflected upon her, even the ones she has no control over. This became evident to me when a young woman I know of had been diagnosed with depression after she tried to take her life. The older traditional generation’s reactions were the evidence that a Pakistani/Indian housewife is not allowed to break and if she does the its entirely her fault. In this case, the housewife had been broken after years of facing cultural challenges, she had finally had enough. However, this was frowned upon by the elders who tutted at her choice to leave her kids and go to rehab to seek help.

One thing I realised from this situation is the infinite and robotic expectations people put on Southern Asian women, particularly a housewife. The housewife is just a maid who maintains her house as well as her family and being Asian that also means her extended family. She is expected to achieve this independently without seeking help especially from her spouse. Imagine running around others all day, trying your best to please them and never getting a chance to relax and when you do your scrutinised for it. I know this may sound like a Bollywood tale, but unfortunately this what many Asian women even from the west have to endure.

I personally feel the South Asian community doesn’t fully understand what a mental illness is or takes them seriously. However, I have found that people talk more freely about someone who’s suffering from a mental illness based on the gender. For instance, if it’s a man who’s suffering from depression then there is remorse, empathy and sympathy. In contrast if it’s a woman and specifically if she is a housewife then it’s “well she’s a bit selfish” “what’s so hard about her life?” or “she’s embarrassed her husband”. I kid you not, these are all statements I have witnessed myself being spoken by someone elderly.

Could it be a Pakistani/Indian woman suffering from a mental illness is brining shame to the family? I would be lying if I said they’re insensitive attitude didn’t affect me.  It’s disappointing and once again reinforces the ridiculous expectation a woman has placed on her, she is not even allowed to have a breakdown without being criticised. Having a mental illness or even just having a breakdown is not acceptable as a woman must remain composed at all times. That’s what women do. But attitudes do differ based on the woman’s occupation too. In my community we expect the housewife to feed the room full of guests but don’t expect the working wife to. Working Asian wives are given more of a right to have freedom and venture. Whereas, an Asian housewife is just expected to get on with it, no questions asked. Going back to the woman I first discussed, the support from her elders wasn’t strongly there, she had accused of being selfish and careless. Even though her medically diagnosed illness is out of her hands. I wonder is this because of the lack of knowledge and education of mental issues within my community or does it just fall back to double standards for Asian women. I mean can it really also be an “izzat” (honour) thing? I guess this discussion is open to your own interpretation. From my own experience, I would say it simply boils down to double standards the community places on its women. 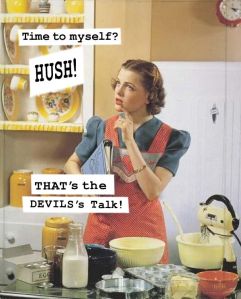 A blog for those who love to read rants, satire and wish to indulge in philosophical thought and truths.
%d bloggers like this: