So as I mentioned in my profile I’ve set this blog to express my outtake on social issues that I feel need to be discussed. I also did mention that I am here to rant too. Whilst I haven’t really ranted (I think) directly like dedicated a whole post to it, well the time has come to do so. After all, what a better way to start the ranting then to rage about bigots. The dictionary definition of a bigot is ‘a person who is intolerant towards those holding different opinions’. That nicely sums up a bigot. I can’t stand a bigot they come in all shapes and sizes and are intolerable to many views about many things.

One of the bigots that really piss me off are the ones who are so closed minded about race. For example, I wrote a post about Ben Affleck responding to Ben Maher’s claims that Islam is a religion affiliated by the mafia. Even though, Islam is indeed a religion there seems to be an ongoing trend that people like Maher are confusing it with it being a race. People are using the term “Muslim” to describe one’s ethnicity! Individuals like Maher are so close minded about race; first of all he hasn’t even acknowledged that it is not just Arabs that are Muslim. And Muslim is not a race for God’s sake. I’ve also noticed that the media is very negative towards convert Muslims from different races. Like when Tony Blair’s sister in law converted to Islam, the media was shocked that’s for sure you could tell they weren’t too happy with her decision. Perhaps because she’s a White British Middle class educated young woman, therefore why would she follow a religion that is so backwards in the media’s eyes? Bigots don’t like it when high profiled folks educate themselves about a subject that bigots feel so strongly negative about. Bigots only like it when people think like them.

Another reason why I severely dislike bigots is when they refuse to see past your stereotype. “Your Black and have degree in biomedicine? Yeah right!” “Your dyslexic but your Chinese?” “All Arabs are definitely linked to the Al’qaeda” “Black women are mostly single mothers” “All White people are racist” “Your South Asian and you don’t like curry?” All Romanian’s are thieves” the list of this narrow-mindedness bullshit goes on. I get the light hearted jokes that are linked to every race which people from their own races have created. It’s great that we can joke about our stereotypes, but then you have those who really believe in these stereotypes and take the jokes that were made to take the piss taken seriously. The bigots only allow themselves to see what they want to see. They find it comforting that these stereotypes degrade us, therefore choose to believe them.

It is indeed these bigots who create the fear inside of us for interacting with people from different races. For instance, I am ashamed to admit this but Seraphic Truth is only about the truth and the truth only. There was a time when I for some reason find it uncomforting sitting next to a black youth wearing a hoodie in the train or walk past one. Why? I thought to myself, he’s done nothing to me and just minding his own business. Is it really because of the colour of his skin or his dress attire? Or the fact that organizations like the media, police, school and government have linked his skin colour to his dress attire? Of course it was. The bigots had gotten to me. So cunningly putting the fear inside me that all young black males wearing a hoodie are dangerous “muggers” or “shankers”. Now I am free from this bigotry prison and the fear they created. I do not and try my upmost best not to judge one’s characteristics by their race. I make myself consciously aware of this and hope my subconscious is also free. Bottom line is that bigots will try their best to cage you in by using different tools and through clever strategies. We can’t escape from the labels and stereotypes or pre-judgments but don’t let that get to you. Carry on proving the bigots wrong by becoming even greater beings; refuse to stop at the limits they have given you as there is no doubt you’ll get people constantly reminding you “hey your black, I don’t think you can get into Oxford to be honest”. So remove these people from your view. Remove the stereotype the world has placed on you. Pretend it doesn’t exist. 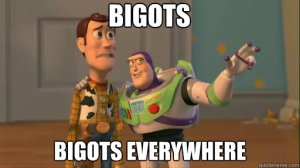 4 thoughts on “Bigots and Race.”