Radical feminists for some reason remind me of the BNP or EDl. The movement is just heading a different direction. For example, the EDL are against British Muslim Pakistanis based on their stereotypes. Likewise, radical feminists are against men, this bitterness of men stems from the stereotype they have applied to a man. Both movements are discriminatory, biased, extreme and always piss of majority of people. I have acknowledged that many radical feminists practically the Ukrainian group ‘FEMEN’ who love to strip of outside religious institution’s to get their point across. Femen who wrongly believe, that Muslim women are oppressed due to the fact that we wear hijab and lose clothing. Femen have also protested outside Mosques naked to “liberate” Muslim women. 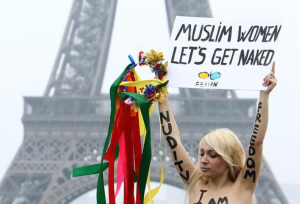 The ideology that being naked means liberation is ridiculous on every level.  How can a piece of cloth imply oppression or patriarchy? It’s clear to see that Femen members have not read the Qur’an or have just pick and mixed any verse and completely took it out of context. Femen believe they want to end patriarchy and in order to achieve one needs to get naked and expose herself. Okay so here’s the logic, these radical feminists believe that men are patriarchal and to them women are second class citizens who are just seen as objects. So by exposing our assets to men will get them to put women first? But by us stripping off wouldn’t that just be pleasing a man’s subconscious sexual nature? I mean if these feminists strip off and then expect men to listen to them, I very much doubt men will be even paying attention as their attention would be diverted to the treasures exposed before them.  After all, a man’s brain works differently to a woman’s right? Instead of getting naked, why can’t these feminists just use their intellect to get their point across, argue their case, and make theoretical references? Surely by behaving like well-educated young women instead of feral women, people would take them more seriously?

Moreover, if these feminists really care about Muslim women who they believe are oppressed, then why don’t they protest outside the embassies of Bosnia, where masses of women were raped and murdered by Bosnian soldiers during the war? These are the women who are truly oppressed, the ones who are caught up in a war zone and being used as sexual objects and degraded on a daily bases. Where do Femen’s priorities for these women come in? I believe that feminists groups like Femen, encourage hate against certain religions because they are indeed racist, painting a picture of “Muslim women are oppressed” as an excuse. If they really did care about Muslim women then they would be out there protesting against war crimes that happen around the world, as no one can doubt that being raped repeatedly by immoral soldiers in your own homeland is the ultimate oppression.

If radical feminist actually bothered to read the Qur’an properly and understand each verse then they would see that there is a whole chapter in the Qur’an devoted to women and our rights. Women are special in Islam, if a women is mistreated then that is the persons fault for rejecting the teachings of the Qur’an, not the religions. This is what radical feminists need to acknowledge, that culture and religion are two separate entities. That people and God are two separate figures.

10 thoughts on “Why do Radical Feminists believe getting naked is the way to Liberation?”